SanDisk is a leading manufacturer of an assortment of digital flash memory products. Some of the items they release into the market include; USB flash drives, memory cards, readers, and solid-state drives. SanDisk Ultra Plus and Extreme are among the models released by this company. They are in the same family but bear different features that we explain here.

The SanDisk Ultra Plus and Extreme have both similarities and differences which are vital in helping you understand them better. These memory devices are from the same manufacturer and therefore share a host of features including aspects such as branding, technology, and the craft used to put them together.

SanDisk which is a subsidiary of WD, sets the Ultra Plus apart from the Extreme model using certain features to make each of the unique and ideal for specific purposes.

SanDisk Ultra Plus Vs. Extreme

The definite differences and similarities between these two models are highlighted in the elements discussed below. Read on to understand these memory cards better so that you can choose one that serves your needs.

When buying a micro memory card, it is crucial to know that speed is one of the vital elements to check out. The rate exhibited by a model should be appropriate for the type of hardware that you intend for its use. The listed transfer speed is among the first that you ought to assess.

The UHS Bus speed is the next one that is essential to consider since it informs you on how data is transferred from the card’s pin to the connector of the host device. Unlike the listed transfer, the UHS Bus speed may not be explicitly listed in the features. It is indicated on the face of the card using roman numerals.

The Ultra Plus and Extreme SanDisk models both have a UHS Bus speed of (I). The theoretical maximum transfer speed for both cards is therefore 104mbps.

The video speed class is another aspect that you cannot overlook. It is indicated using a V icon on the face of the memory card, and it is for video-specific recording. The 64GB SanDisk Ultra Plus product lacks this marking; hence, it may not be an excellent pick for video recording.

The 128GB version is a V10 meaning it can record videos at 10MBps. The SanDisk Extreme cards, on the other hand, have a V30 marking on all the sizes starting from 32GB to 1TB. They can be used to record a high definition video comfortably.

The UHS rating for the SanDisk Ultra Plus model is one while that of the Extreme variation is three. The number inside the U-shaped logo can identify this type of speed. If it is one, then that equates to 10MBps while 3 is 30MBps. The Ultra Plus models are rated A1 in in-app performance and faster loading while the Extreme ones are rated A2.

Both memory card models are measured in gigabytes. The SanDisk Ultra Plus models are available to a maximum of 128GB while the Extreme goes to a high of one terabyte. The capacity of a card is dependent on the file system that is used for data storage. SD, SDHC, and SDXC are among marking that you must be conversant with as they guide on the capacity.

SD cards store up to 2GB, SDHC has a maximum capacity of 32GB while SDXC versions go as high as 2TB. Both models discussed herein are SDXC versions with high storage capabilities. The type of work that you engage in, coupled with the speed, should guide you on the right card for you to acquire.

The technology used to design a memory card dictates its functionality. The SanDisk Extreme has been made with Ultra DMA technology that allows this device to achieve double read and write speeds when compared to the SanDisk Ultra Plus.

Typically, ultra cards are made with a maximum speed of 30MBps for all versions except the 2GB models that have a maximum speed of 15MBps. Tech is among factors that you must have in the back of your mind when buying memory cards, and as it stands, the SanDisk Extreme version has better technology than the Ultra Plus models.

SanDisk offers a lifetime warranty for most of its products and these two models discussed herein have this in common. Whether you buy the SanDisk Extreme or Ultra Plus, the guarantee you receive is the same.

It is essential however that you read through the print containing the terms and conditions for each model before you settle on one. The return policy and shipment regulations are among the other elements that you must consider before placing an order. 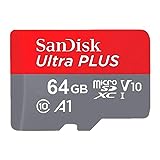 The SanDisk Extreme model was released into the market after the Ultra Plus and other models in the same series. It is better placed regarding technology and compatibility with devices being released into the market. The models compared in this review are both excellent and reasonably priced but you need to be specific with the features above to get the desired results.

What class is SanDisk Ultra Plus?

SanDisk Ultra Plus is a micro memory card that is available in different sizes. It is ranked A1 in-app performance and speed and records at 10MBps.

The design and technology used to build ultra-memory cards make them good. To get the best results, make sure you get the right fit for your hardware and the task at hand.

What is SanDisk Extreme Plus?

SanDisk Extreme Plus is a microSDXC card that offers users high speed and app performance. It can handle 4K footage making it ideal for an array of devices. It can be used on mobile and tablet devices as well as cameras and drones. Full HD motion pictures and high-resolution images can be recorded and stored on them.