4K basically envelops tow high resolutions; this includes an aspect ratio of 3840 x 2160 pixels and 4096 x 2160 pixels. When 4K is mentioned, it basically refers to twice the line resolution or 2160p or four times pixel resolution. Using 4K on multimedia devices has clear benefits, as it provides a clearer and more detailed picture.

Now, 4K stands for ultra high definition and provides a higher resolutions through horizontal pixels. When you are dealing with 4K, you are looking at pixels on the horizontal edge of a rectangular frame. If you do the math, 2000 pixels on the vertical edge of 4K comes with approximately 8 million pixels. 8,294,400 pixels to be exact.

The 4K phenomenon has been coined as a big marketing advantage by numerous manufacturers of television screens and computer monitors. It is claim that video is much clearer, but that color is also better on a higher resolution. However, with 4K resolution, you must remember that the horizontal edge is 4000 pixels and the vertical edge 2000 pixels. So, the answer to the “what is 4k resolution?” question is not as simple as first thought.

Same as television screens, you can find cameras with such high definitions as well. It is important to remember that cameras with a higher resolution will require an SD card with a higher capacity. Your current SD cards may not have the capacity for 4K cameras, nor will they be able to store all the 4K video. So, when you purchase cameras who are able to capture 4K, be sure to get the appropriate storage cards to go with them.

How many megapixels is full HD?

To understand how megapixels are translated in full HD, we need to understand the difference between them. In theory, HD could be considered as a subcategory of the megapixel. For example, a camera with more than one million pixels is automatically a megapixel camera. The lowest available resolution is 1280 x 1024 pixels, while some of the highest camera resolutions span a number of pixels of 3648 x 2752 pixels.

The pixel definition of an HD camera is a resolution of 720p or 1080p. Both of these refer to to the horizontal resolution we mentioned earlier. So, an HD camera of 720p is not considered as a megapixel camera. Nevertheless, this does not necessarily mean that they provide less quality where color and video is concerned. It all depends on the kind of camera you need.

1080p refers to 2 megapixels, so it is basically half of 4. Where video is concerned, the additional number of pixels can have an influence on color and video clarity. That being said, pixels are not the only consideration when it comes to choosing a high-quality camera, television screen, or computer screen.

4K is also known as Ultra HD. It is used to acquire much more detail and texture on video. Even though 4K is considered as relatively new in the world of video technology, 5K has also made its entrance for video. On the bright side, this has made 4k resolution screens and cameras a lot more affordable.

It is important to note, however, that there is a small difference between 4K and Ultra HD. While 4K is commonly defined as 3840 x 2160 4K resolution, this is actually the definition of Ultra HD. 4K is actually the exact video resolution of 4096 x 2160. Nevertheless, both terms are used interchangeably, which has altered its definition over time.

When 4K was new, it was quite difficult to find content that could be played under that resolution. Fortunately, 4K television is not as new as it once was, so there are plenty of television stations that now play their video content in a resolution of 4K.

How To Select A Genuine 4K Television

When you select a UHD television, there are many things to consider. So, to end this overview, let us give you some much needed pointers to select the right television with 4K resolution.

Check the resolution: When you purchase a 4K, always make sure the resolution is accurate. Something may be advertised as 4K, never trust a sales pitch alone. In other words, check for a resolution of 4096 x 2160.

To be considered as true UHD, the television screen in question must meet certain requirements. It must have a high-dynamic range enabled, show at least 90% P3 color gamut, minimum brightness to influence white and darker colors, 1024 shades of primary colors, and a minimal display resolution of 3840 x 2160.

Check for HDR: Nowadays, consumers look for something called HDR, which stands for High-Dynamic Range. HDR basically has an impact on the richness and depth of colors, and not so much clarity as one would expect. Nevertheless, it is an incredibly important feature for any modern television. If incredible picture is what you want, then HDR is an unmissable option.

HDR types: When you start looking for 4K televisions, it is vital to know that there are multiple types of HDR.

One of the HDR types is HDR10. This type of HDR is commonly used by major brands such as Sony and Samsung. Since HDR is used by these big brands, you are likely to encounter this open format HDR.

As a second form of HDR, you can encounter Dolby Vision. It is a closed format, which means it requires a specific chip inside the television. However, this closed format HDR is not used inside Sony and Samsung televisions.

You do not have to choose one or the other when it comes to HDR, because some television brands such as LG and Vizio offer both HDR technologies. If you don’t want to choose one over the other, you could choose a television of either of these brands.

Check your TV is 10-bit: Do not obtain an 8-bit television when you are looking for 4K, as it cannot deliver the range of colours you truly need for this resolution. 10-bit televisions are also more likely to stand the test of time. So, if you do not want to be in need of another upgrade in the nearby future, be sure you are future-proofed with a 10-bit television.

Consider OLED: LED comes with most modern televisions, but you may consider a television with OLED instead. OLED screens work on a pixel-by-pixel basis, which means that you can count on a much more vivid contrasting and even true blackness.

When you consider OLED, you must consider some of the disadvantages it may bring. OLED screens have shown to score a little less than LED scores in terms of brightness. Some OLED screens may also suffer from input lag. So, if you are considering OLED, be sure to have a thorough look at the reviews and research the television screen properly to avoid problems. 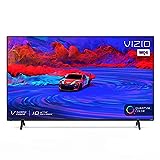 Things To Remember About 4K

There are a couple of things to remember about 4K. Firstly, remember that not all televisions and screens advertised as 4K are necessarily that. Always check the resolution of the screen before you make a purchase. Also, be sure you check that the screen in question meets the requirements we explained in detail earlier.

Fortunately, you have a pretty good idea what you are looking for now thanks to our overview with vital information. Simply use this overview as a guide during your screen selection and you are bound to come up with the best option out there.